The Grand Duchy of Luxembourg is located at the heart of Europe. It is a multilingual and multicultural country offering plenty of cultural activities and where the everyday life is full of opportunities, socially, politically and professionally speaking.

Before coming and discovering Luxembourg in the context of CIBW 78 - LDAC 2021, the organisation team invites you to take a closer look at "Where to go in Luxembourg" and "Why should you visit Luxembourg?" in this section.

Luxembourg, where to go?

The Grand Duchy of Luxembourg leaves no one indifferent, for it has its own place in the concert of nations: a pioneer of economic alliances and partnerships, a modest and persevering mediator, and a nation where everyone feels at home. Luxembourg city, where to go?

All information available at visitluxembourg.com.

Known as the Little Switzerland of Luxembourg, Mullerthal - or Mëllerdall in Luxembourgish – is definitely a place to visit and walk through. Capital of the Mullerthal region, Echternach is the oldest town in Luxembourg.

What are the main places to visit in the Mullerthal ?

All information available at visitluxembourg.com

Le Land of the Red Rocks

The Land of the Red Rocks is a region of Luxembourg located in the south of the country. The former mining area, also referred to as Terres Rouges, has established a new identity through combining ancient and new technologies. Where to go to experience the land of the red rocks ?

All information available at www.visitluxembourg.com

With their majestic landscapes that alternate between scenic highlands and winding valleys, the Éislek region (Luxembourg Ardennes) located in the North of Luxembourg offers an exceptional natural experience. Visitors can enjoy number of cycling and hiking trails through the forests and picturesque villages. Where to go?

All information available at www.visitluxembourg.com.

Just outside the city of Luxembourg, the visitors will find an enchanting setting of charming villages with old farm houses, imposing castles and beautiful natural landscapes. In the Guttland region, the accent is placed on "Slow Tourism". Where to go in the Gutland ?

All information available at www.visitluxembourg.com

Why should you visit Luxembourg?

Luxembourg in the world

About the history, the city of Luxembourg, the thousand-year-old capital of the Grand Duchy, was founded in 963. Luxembourg measures a maximum of 82 km from north to south and 57 km from east to west. Over the course of its history, Luxembourg has been occupied by Burgundians, Spaniards, French, Austrians and Prussians, all of whom contributed to making it one of the best-fortified cities in the world, the “Gibraltar of the North”. Today, the fortress, along with the Old Town, have gained international recognition.

… three elements of Luxembourg‘s heritage are officially recognised by Unesco?

The fortifications and old quarters of the City of Luxembourg have been registered on the Unesco World Heritage List since 1994; the photography exhibition ‘The Family of Man’ by Edward Steichen was added to the Unesco Memory of the World Register in 2003 and the Echternach hopping procession was registered on the Unesco Representative List of the Intangible Cultural Heritage of Humanity in 2010.

… 23 km of passages that date back to the times of the fortress and are known as ‘Kasematten’ run beneath Luxembourg City?

Indeed, the casemates of the Bock Casemates and those of the Petrusse Valley form an extraordinary network of 23 km of underground galleries and more than 40,000 m2 housed in the rocks of the city. The Casemates of the Bock, which counted about fifty guns, were dug by the Austrians in 1745/46. During the two world wars, they served as a shelter to protect up to 35,000 people in case of alarm or bombing.

… Luxembourger Pierre Werner is considered the ‘forefather of the euro’?

During his time as Prime Minister, Pierre Werner (1913-2002) was appointed to head a European group of experts and in 1970 presented the European Commission with a monetary integration project known as the ‘Werner Plan’, which can be considered the beginning of the euro.

… Robert Schuman, one of the founding fathers of Europe, was born in Luxembourg City?

Robert Schuman was born in Clausen, a suburb of Luxembourg City, to a Lorraine father of German nationality and a mother from Luxembourg. His mother tongue was therefore Luxembourgish. It is often mentioned that Robert Schuman’s personality was influenced by his origins. The combination of these Luxembourgish, German and French influences doubtlessly prompted him to launch a plan that was to result in the creation of the first European Community.

The most important values of the Luxembourg people are family, work, friends and leisure. This was revealed in the European Values Study (EVS), which aims to identify and explain the dynamics of changing values in 45 European countries.

The linguistic situation in Luxembourg is characterised by the use and legal recognition of three languages: Luxembourgish, French and German. The importance of the linguistic coexistence of these languages is an integral part of the national identity.

In work life, given that the majority of the working population is foreign (71%), French is the main language of communication, followed by Luxembourgish, German, English and Portuguese.

Luxembourg, a city of contrasts

Capital of a small country, Luxembourg City is nevertheless a lively and bustling town. A real cultural platform, it abounds in venues for artistic expression, such as museums, theatres and concert halls. The centre of the country is also home to all the different nationalities that have chosen to live in a city at the heart of action. The cultural programme that makes up Luxembourg is made in the image of its city dwellers: multilingual, multicultural, creative and eclectic.

The centre of the country is also home to all the different nationalities that have chosen to live in a city at the heart of action. The cultural programme that makes up Luxembourg is made in the image of its city dwellers: multilingual, multicultural, creative and eclectic.

Nowhere else in Europe will you find such a discrete and dynamic mixture of ancient fortresses and contemporary architecture. Moreover, the Old City of Luxembourg has long been part of the UNESCO World Heritage. High-tech buildings run alongside historic monuments reflecting a rich tapestry of urban experience. In short: Luxembourg is a modern city with deep roots.

Did you know that …?

… three researchers of Luxembourg origin have won a Noble Prize?

… the only woman in the world to have won a Bocuse d’or is from Luxembourg?

Léa Linster, owner of the eponymous Michelin-starred restaurant, is the first and, to this date, only woman to have won this prestigious award.

…. the father of science fiction was from Luxembourg?

Hugo Gernsback was a scientist born in Luxembourg on 16 August 1884. Among other things, he invented the dry cell battery, the wireless radio, the synthesiser, the transistor without aerial and the lie detector. Over the course of his life, he filed more than 80 patents. His real passion, however, was writing science fiction novels. Incidentally, he was the one to invent the term ‘science fiction’, which was quickly adopted the world over. 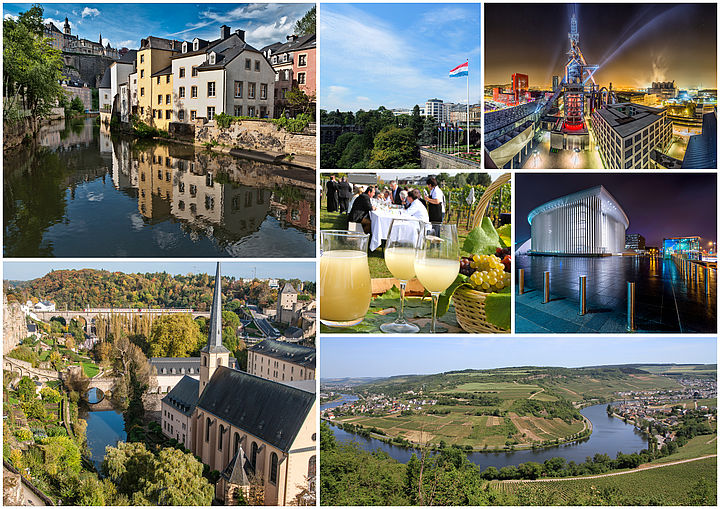